Availability: No Longer Made

Super Soaker SoakerTags is the first soaker-determination device under the Super Soaker name. SoakerTags, themselves, appear to be included with all 2004 Super Soakers and can also be purchased in packs of twelve. There are two parts to the SoakerTag: the tag and the plastic tag clip. 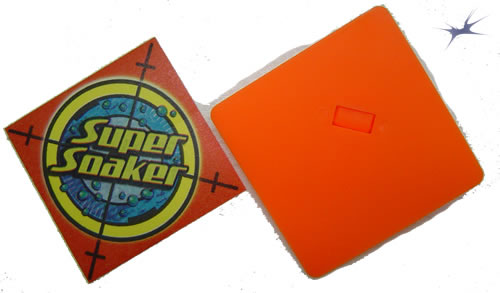 SoakerTags are typically found in perforated strips. There are both red and blue SoakerTags available.

Each tag has a backing that needs to be peeled off to expose an adhesive. The tag can then be attached to the SoakerTag clip. 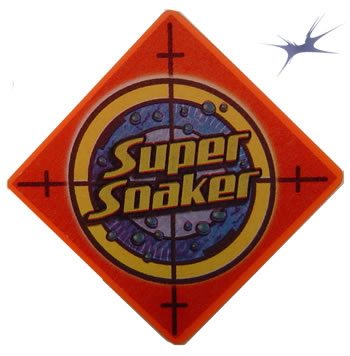 The purpose of the SoakerTags is to allow Players to determine whether someone should be considered eliminated or not. As clips can be easily attached to clothing, the idea is that if one's SoakerTags have been blasted off by water, one has then been soaked. According to Hasbro, SoakerTags are starch based and dissolve when hit by water. It is interesting in that water at lower velocities does not appear to be able to affect the tag apart from getting it wet and making it a little more labile. 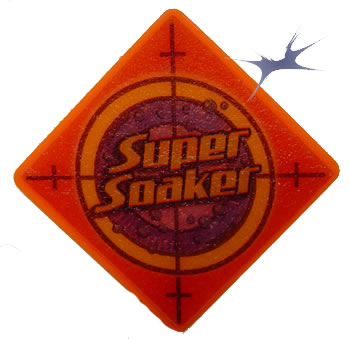 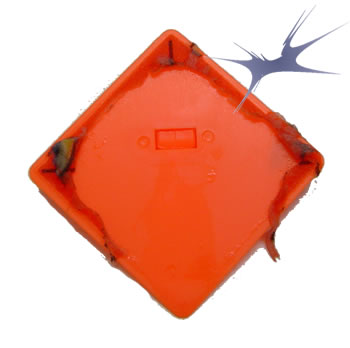 The significance of this means that in a water fight game, glancing or stray streams of water will not be enough. Thus, more direct soaker shots would be needed to eliminate a Player.

Offers an objective way to determine whether or not a Player has been eliminated from a game or not. Being starch based, SoakerTag bits are readily biodegradable and environmentally neutral.

SoakerTags are one-use-only objects. Once a tag has been blasted off, it cannot be recovered. Since SoakerTags cost money to replace, widespread use in water fights is not as likely. Residue from SoakerTags feels a little sticky/starchy, thus it is not advised to be wearing good clothing that cannot be easily washed (then again, it IS a water fight so tuxedos are unlikely).