Re-posted with permission from Duxburian. Don't forget to check out Soaker Media.

Well, our season-opening war was earlier tonight, from 7 PM-9 PM. Unfortunately, Waterbridge was unable to field a team and Belisaurius himself could not go. But the Ridgewood Militia had already mobilized and armed too many people to cancel. So we decided to turn it into a battle winthin ourselves. There were 15 of us, so we split by the squad groups that we had decided on a while ago. I headed a group of 8, Nibordude had a group of 7. So the battle was 8v7, each side with a Douchenator.

So it starts: [remember, it is pitch dark]

Nibor and company walked down the West Bank and disappeared. I took my group along the East Bank to the Gazebo on the left side of the park. The gazebo had a blinding light on the top, with an open area of trees and a mulch mound to the left. Darkness and a small area of woods was on the right. We set up there, intending to draw an attack. The attack finally came from the left, after exchanging a few Douchenator blasts. Nibordude started putting more pressure on the flank and we sent a few scouts out ahead to make contact. Logan fired the first actual shot and Jay was hit in the exchange. Enemy artillery was not accurate, but made us dive for cover.

Nibordude's group now spread out and advanced so that they would overwhelm the flank. Seeing this danger, I called for a retreat. In haste we feld back to the gazebo, gathered our gear, and used a back exit out into the dark woods on the right. I was fearing being surrounded and trapped with our backs to the OB line, but Nibor made no move to block the path out. We got the hell out of there once we realized they weren't coming.

We sprinted to the Spring St. Bridge, where we started, and crossed to the West Bank. The East Bank is rather open, so we saw Nibor and company in pursuit. Further down the path we set up an ambush, hiding behind trees on the beginnning of the bluff. Mike stood in the middle of the path wielding the Douchenator and Jay behind him with his searchlight. Empty shots from the Douche plus Jay's light signalled to Nibor that we were somewhere around there. Mike fell back with Jay also falling back, still shining the huge light. This drew them in closer, nearly parallel with my position, which was the closest to them.

2 from Nibor's group began to climb the hill 30ft in front of me. I thought to myself "hold your fire, hold your fire, hold your fire, get ready, NOW." I leaped up to spring the ambush and took shots at the 4 closest people. That started a brief, but rather intense exchange of fire. They were starting to fall back when I whispered to my team "We are going to do a false charge, when I yell charge, take a few steps but don't actually do it." "CHARGE!" I took 10 running steps and Nibor's group reeled back, running back to the bridge while we came out of the false charge and ran the other way. Regouping way down the bluff, we decided to get Jay's searchlight, which we left at the gazebo.

There was no other direct action in this battle, other than our slow retreat to the opposite bridge and manuever back to the gazebo. They had a leisurely pursuit and never left the West Bank. We next saw each other on opposite banks near the Spring St. Bridge, but it was 9 and the battle was officially over.

So I lost 0-1. But whatever, it was a good war and very intense.

It was unseasonably warm this week, so the temperature for the battle was nearly perfect. Speaking of intense, did I mention that 3 of our group wore metal army helmets? Although it would have been more intense if Waterbridge had been able to come and field a large team. A 15 v like 10 in the pitch dark would have been much, much more epic.

I could have tied the score had I been more aggressive when shooting to kill. Since I was still used to my 21K [broken right now] I conserved too much water with my 2500. 3 seconds is triple what I'm used to, I was not ready for so much shot time. I should have used 10x, and shot for longer bursts. Plus, I had to let the enemy come too close before shooting. The 2500 has ~12ft less range than my 21K, and I forgot about that. I'm used to double their range and taking shots from well outside of possible retaliation.

So, what did I learn? Don't miss when gluing over a hole in a check valve, and make plenty of water balloons. We stayed on the defensive, mainly because we knew something Nibor did not. We had no water balloons left and he did. All our mid-later artillery shots were blanks. 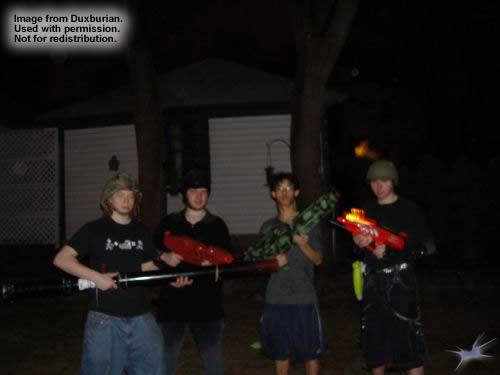 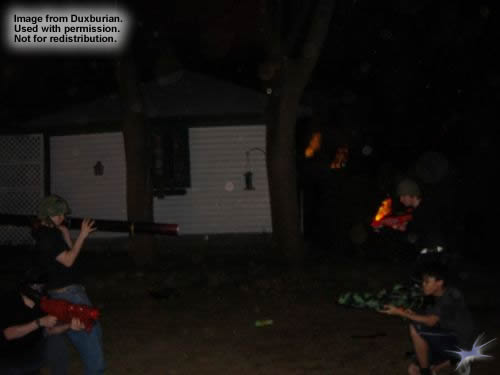 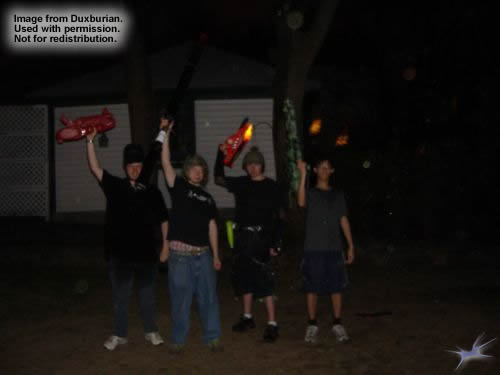