Defending an area (especially bases) can be tricky if the opposing Team has a lot of places to hide on the approach. Also, one cannot be looking everywhere all the time and expending Players on simple patrol missions limits the numbers which can actually go out and engage the opponents. To solve these problems, alarms and watermines can be set-up around an area of interest to soak opposing Players moving in the area or alert one if an opponent is near.

The best and cheapest type of alarms to use are based on the tripwire. However, instead of being a tripping device, the trip-wire alarm is designed to make noise when crossed. Fishing line or black thread work best since they are hard to see. The line should be supported about 4" - 6" above the ground by sticks or some other hard-to-notice means. The line is fixed at one end and attached to a noise maker (i.e. a bell, some sticks & cans, personal alarm) at the other end such that if the line is pulled, sound is made which can be heard at least 30'-50' away to provide a good forewarning signal.

Just be sure to note where the alarms are set in order to not activate them, oneself.

Watermines are devices which are designed to spray water at an opponent upon being stepped on. There are two types of watermines commonly used:

Basic watermines are simply concealed water balloons placed in areas where opponents are likely to travel. The advantages of using these types of watermines is their ease of set-up. However, these watermines are not too effective since most water from a waterballoon tends to end up on the ground or, at most, the foot of an opponent.

Advanced watermines are based on empty soft, plastic bottles. Larger (not too large) and softer the bottles work better since they hold more water and fire more water quickly.

To make an advanced water mine, start by making sure the bottle is empty and rinsed well with water to get rid of the soap, shampoo, etc. which it had previously contained. Note: Do NOT use any bottles which had contained toxic substances such as bleach, toilet bowl cleaners, etc. Once cleaned, first fill the bottle with water, fasten the cap and make sure there are no leaks by gently squeezing the bottle. If no water comes out, empty the water and drill/make two holes into the bottle on one face: one near the top and one near the bottom. The holes should be about 2mm in diameter. If the holes are too large, range is reduced. If they are too small, not enough water will be fired. Two holes are suggested so that if one is covered when the device is stepped on, the other will still fire. Once drilled, fill the bottle by opening the top cap, holding a finger to close the bottom hole, topping up with water, then closing the top cap.

Water mines should be placed around an area of interest and camouflaged under some leaves or under very thin layer of soil.

Booby-traps and alarms are best used to defend a base. Watermines can also be used to fence in opponents, but this can be tricky and require many more of these devices and time to set-up. 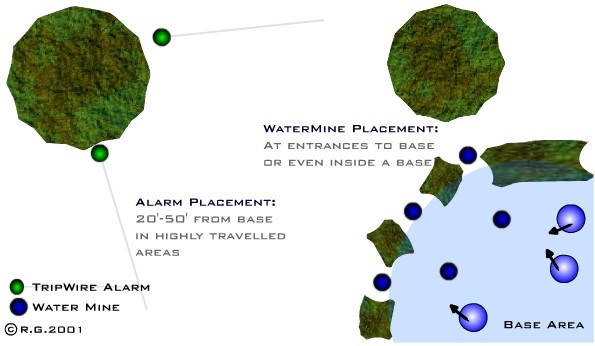 The above diagram shows a suggested pattern of placement for alarms and watermines. Alarms should be positioned a little farther from the base to give a good notice-time if opponents are approaching. Watermines are used to guard the base entrances to soak any opponent who tries to enter.

Alarms can be used to give advanced warning if one's base if under seige yet they must be avoided when attacking opponents. The true water fight Player must know when and where to use them and how to avoid and disarm them.

Setting them up is a simple task to do, but tricky to do it well. The best alarms are those using light beams that, when broken, activate a siren. Of course, these are rather expensive and not the sort of thing that most people would use for a water war. The other, simpler type is the trip-wire alarm. Black thread or thin fishing line should be used to the trip-wire. These type of alarms should be set up in areas where opponents may approach from. The wire should be suspended above the ground about 3"-6" unless one is setting up an step-wire alarm which would place the line only about 1" above the ground. One end of the string should be fixed while the other is attached of a suspended bell or personal alarm. When the string is pulled or stepped on, the bell/alarm should sound off and should be loud enough to be heard at least 50' away to be of use.

The length of the trip-wire should span a width of at least 3'. Too short and it will can be easily missed. Too long and the alarm may not activate properly.

The supporting sticks and alarm device should be hidden from plain view by being behind trees, under loose leaves, behind rocks, etc. From the suspected route of approach, the alarm should be virtually invisible except for the string which should be very difficult to see unless they are intentionally looking for it. The string, due to its function, always has the chance of being discovered, but more than likely overlooked by those not expecting it there.

As an aside, all Team members should be made aware of the different alarm positions to prevent any accidental triggering by one's own Team.

Setting up alarms around one's base's perimeter is great, but one must also be able to find, identify and disarm any alarms which may be between one's position and the opponent's base.

The lower one is to the ground, the more likely one will see a string strung across a pathway. Staying low also helps keep one out of sight. Any routes leading to the opponent's base (or beyond explored friendly regions) should be suspected of having alarms. Each step should be taken with caution, looking for that nearly invisible line crossing one's path.

If an alarm is located, the string should be traced to determine what form of alarm is being used. Most of these alarms can be easily disarmed by cutting the wire while holding both sides and gently lowering either end to prevent any bells/personal alarms from going off.

Watermines are great for using to protect one's base, but can even be used offensively. Of course, one must also be wary of opponent's water mines when travelling in unknown territory. As mentioned above, the basic watermine is simply a disguised water balloon. These types are not always effective at getting even one's foot wet, but can be annoying. The more advanced type is based on soft plastic squeeze-bottles and pose a serious threat to one's dryness.

The best position for water mines when used for protecting one's base is at entrances. Mines also work best is they are arranged in clusters. If opponents miss stepping on one, they are likely to hit the one next to it. The main problem with clustered mines is properly disguising them into the terrain. If leaves can be used to cover them, they should be arranged such that the ground does not look disturbed. Leaves should not be used if they are the only leaves in the vicinity. Most people get suspicious when all-of-a-sudden there is a cluster of leaves in the path. Burying water mines under a thin layer of dirt is often much more effective. The difficulty here is digging holes large enough to fit the water mines, yet covering them with just a touch of dirt to hide them and ensuring that the dirt looks natural and not tampered with. Burying water mines takes time and practice to do it well. Do not bury water mines under too much dirt or they will not activate properly when stepped on. The dirt that covers the watermines should not be packed tightly.

If time allows it, watermines can be used offensively to surround opposing Team encampments. This, however, is usually not feasible without being caught. Watermines can also be used in making an automatic trap. Watermines can be set-up in a secluded area in advance, then the mine-layer can go antagonize the opponents and have them pursue him into the trap area, avoiding stepping on his own mines. If done properly, the opposition will enter the trap zone and activate the watermines, giving them an unexpected soaking they will not forget.

The easiest way to carry watermines around is by taping the holes shut until they are placed, at which time the tape should be removed.

Unlike trip-wire alarms, watermines can be much trickier to locate. Well-hidden mines can guard a path yet be indistinguishable from mine-free terrain. Metal detectors are of no use since watermines are typically made of plastic. The best way of finding mines without stepping on them is to use a long stick to test the ground before stepping forward. Any leaves or earth covering a watermine should be loose for them to work properly. As such, a stick can be used to test for loosened soil or to sweep away debris which may be covering a watermine.

If found, the simplest way to disarm it is to unbury it and empty the contents. It is usually NOT a good idea to use watermines' water for refilling one's weaponry since dirt may have entered the mines when they were hidden. If the opposition does manage to discover one tampering with the watermines, one can always use the watermines discovered as a close range weapon, squeezing the mine and aiming the holes at the opposing Player effectively using their own trap against them.

It is also NOT a good idea to simply try and jam up the water mine's water holes with objects since accidentally stepping on the mine may result in firing out the plugs at a rather high velocity at another's face. Emptying the discovered water mines is a much safer and guaranteed method of deactivation.