When moving through the playing field, it is usually wiser to travel with a Teammate rather than alone (unless one is a sniper, scout or lure). However, when travelling unknown terrain with two or more people, one must arrange the group to best handle possible encounters with opponents. The following is a short overview of some suggested formations depending on the number of people. For most formations to work, the Players should be no more than 2-3 metres (5'-10') from their nearest Teammate.

Two-Player formations are the simplest and quietest. Stealth and speed can be easily achieved but having only two makes guarding one's blindspots harder.

Three-Player formations allow for a little more coverage and flexibility, but reduce the group's ability to travel unnoticed.

Four-Player formations offer even more flexibility than the three person ones, but further reduce the group's ability to perform any sort of covert operation.

Five or more Player formations begin getting more complicated simply due to the number of members in the group. Large groups are usually better divided into smaller ones. The more Players in a given area, the easier it is for opposing Players to hit any one. The figures above suggest some possible group formations which can be extended for greater numbers of Players.

As useful as formations are, the constituents of the group also have optimal placement in order to maximize each Player's strength while minimizing their weaknesses. The following is an extension of the formations outlined previously. These formations become irrelevant if all members of the group use the same blaster, but can provide valuable insight if working with mixed-size blaster users.

Two-Player mixed levels of armament do have an optimal way of moving together.

Three-Player formations allow for a little more coverage and flexibility. Mixed groups again have an optimal way to travel.

Four-Player formations offer even more flexibility but further reduce the group's ability to perform any sort of covert operation.

Five or more Player formations begin getting more complicated simply due to the number of members in the group. Large groups are usually better divided into smaller ones. The more people in a given area, the easier it is for opponents to hit anyone. The figures above suggest some possible group formations which can be extended for greater numbers of Players

Soakers of differing abilities can be combined in some very potent ways to guarantee a good balance between soaking ability and defence. This, combined with Players who know how to make use of their respective blasters will generate small tactical units who can take on larger, inexperienced groups with little fear of counterfire. 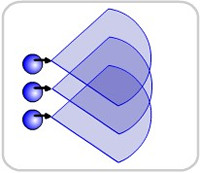 This formation takes advantage of various blasters' Fan-nozzle setting (i.e. the SC Power Pak, SC Big Trouble, Monster, Monster XL, etc.) The formation itself is rather simple with allies spread apart around 3 to 5 feet in a row with all blasters set on Fan. Attacking a larger group in this formation is simple since the area of water coverage that can be achieved is very high. As well, since all members of the attack squad are relatively close, the sprays from individual blasters will overlap, resulting in a more thorough soak than would be achieved if only one individual were present. The main drawbacks to thise attack formation is that overall range of attacks is limited. Also, since blasters are on their fan settings, individual opponent targets cannot be isolated. 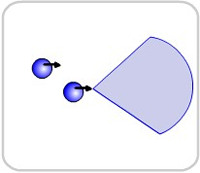 While some may argue differently, most people when under attack, even if only from a fan nozzle spray, tend to duck, block, or attempt to defend. With this in mind, the idea behind this offensive formation is to make use of a fan attack to suppress opposing counterfire while having an ally with a good-sized blaster to identify and saturate the most threatening opponents. The fan-spray user has more limited range, thus must get in closer to opposing Players. The saturator can be a few steps back making use of his blaster's range and power to soak any those have not turn and run. The most difficult part of achieving the desired outcome is finding someone willing to go in and suppress return streams using a fan-spray since that user must get closer than usual to the opposing forces. (Note: A CPS 1-3-5 or a Helix work particularly well as suppression blasters.)

This is not as much of a formation as it is a way of attacking. The idea behind this is to compensate for the fact that most blasters have a limited firing time. Thus, for this to work, the group must synchronize their shot times such that someone is firing while another is repumping. To maximize area covered, only short bursts from each soaker should be used as well as quick pumping between shots. This will prevent any Player from being out of pressure when it is their turn to fire.

"Divide and conquer!" Sometimes to break apart an opposing Team's formation, one's own group should concentrate their offensive maneuver against a middle Player. This will often cause the opposing Team to fan out, but if done quickly enough, means that the Team on the offense can go about eliminating one Player at a time as opposed to facing Team-to-Team. This maneuver, however, only works well if the opposing Team is not as well trained to deal with such an play. This is not recommendable if facing a skilled Team as this bunches one's own Team together and restricts individual Player movement.

Flanking simply involves avoiding doing a frontal offensive play and instead, opting to attempt to charge from a more vulnerable angle. Successful flanking requires both speed and quick assessment of the Team to be flanked. The idea here is to turn a broad defensive formation into a line in which those farther back in the line make less effective defenders. Optimally, the Team on the offense wants to head quickly towards the side with the weaker opposing Player in order to increase the chance of a successful flank maneuver.

Circling can be an effective tactic if used well. The idea here is to trap the opposing Team in a more restricted area while giving one's own Teammates room to move, aim, and dodge without fear of cross-fire. The encircled Team ends up bunched together with a much more limited movement options. While quite effective, this maneuver tends to only work against non-coordinated teams or novice players. The main drawback to this formation is that it divides up one's own Team's soaker-power.