The iSoaker.com 2007 Summer Sitewide Update is one of the larger updates attempted for awhile. Finding inspiration from a number of sources, the overall look of the site has been refined; even the landing page of iSoaker.com has a cleaner, wide-screen-view, feel to it. Side-menus serve also to identify which section one is browsing while having a pop-up drop-down links to all the major sections upon rolling over with the cursor, this is true even in the iSoaker.com Forums. The entire iSoaker.com Armoury Review section has been revamped with revised imagery and a number of broken links fixed and/or removed as well as fixing various mistakes. As well, blaster sorting terminology has been adjusted, now listed as Air Pressure System, Elastic Pressure System, Piston Pressure System, and Other.

Two special pages were created: the Water Blaster Hall of Fame (to recognize notable water blasters) and the iSoaker.com Heroes Page (to honour the significant contributions of a number of individuals/aliases to the development of Soakerdom).

In line with the goal to increase water warfare discussions, a number of new articles discussing water blaster use and water warfare set-up are now under development with additional information to be included in the near future. A new online form to hopefully increase interest in reporting water wars was also created.

The summer of 2007 has been a good thusfar. Here's hoping for an even brighter future for water warfare worldwide! Soak on!

Site factoids: There are over 5800 jpg files in The Armoury section alone; over 7800 for the entire site. There are another ~1400 gif files as well. There are also more than 180 articles with over 50 war stories and reports.

The iSoaker.com 2008 update is one of the less obvious, but interestingly ambitious updates attempted since the start of iSoaker.com. As opposed to major layout changes, iSoaker.com has had parts of its layout and inner organization further refined. Perhaps the most obvious changes are the new site header that has a large-button-type format as well as the fact that the header and side-menu-nav are fixed in place and do not scroll while the page content scrolls beneath. As well, the minimally used "Soaker Network" was removed with its few pages merged into the "Information, Etc" section. Other changes lie deeper into the site, notably enhanced image pop-ups for review page additional images and some other graphical enhancements. For 2008, iSoaker.com will primarily focus on its strengths, namely stock soaker review, soaker images, war stories and general articles, as well as water warfare community interactions via the Forums. The iSoaker.com Forums, themselves, have been tightened up with the "Soaker Network" forum also removed and one of the archive sub-forums having its topics remerged with the remaining active sub-forums. Now we anxiously await more news on the upcoming 2008 stock soaker offerings.

Back when working on the update to greet the start of 2008, little did I realize just how many things would occur between then and now. A number of significant events have transpired since the last update. The iSoaker.com Ikonboard became unstable and was thus archived. In its place, iSoaker.net was launched, running on the latest release of phpbb. As well, in February, I had the opportunity to attend a product development meeting at Buzz Bee Toys Inc. This was the perfect opportunity to be able to express a lot of desires of the online water warfare community directly with a stock water blaster manufacturer group and get both feedback and insight into things they have and are planning to do. Even the mere fact of being invited to attend such a meeting has now fulfilled one of my long time goals at bridging the gap between the water warfare community and the manufacturers. As all appears to have gone well during the meeting, I have good hopes for the future. However, as noteworthy as such events were, those are now past. Here, I continue to look towards the future and the current update moves the site along that direction. 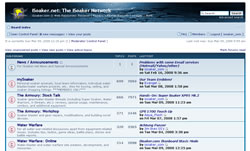 For the site, the top navbar, having been Flash-based since 2004, has now been replaced by a CSS-based dropdown menu. However, as many liked some of the features present in the various iterations of the Flash-menu, it was retained, but now resides as the site's footer navigation. While not a massive change, per se, it does now allow visitors with and without Flash to see most of the site as it is meant to be viewed with the proper header graphics in place. There have also been some graphical adjustments made to various pages on the site, but these changes are small and numerous, thus not listed. Presently, only one 2008 stock water blaster has been reviewed, but I look forward to review others in the not-too-distant future. I have a number of the latest 2008 stock water blasters now, but haven't had time to put full reviews together.

Site updates aside, as a result of attending the product development meeting, I have been further convinced that the best way to push for better products is to increase demand for them. Demand can only be increased through increased general public desire to want better water blasters. This, in turn, can best be accomplished by giving people a goal, namely to compete in organized water wars. Now, to have organized water wars, one needs to have a set of rules and guidelines, particularly for those newer to the sport. As such, reviews aside, the main goal for 2008 is to help develop a good, usable set of rules and guidelines to push water warfare forward. This is only the beginning.

Roughly ten years ago, I began building a website dedicated to a rediscovered joy of mine, namely the water blaster. In July 18, 1998, Aquatechnology was uploaded to my ISP-based hosting account, beginning my contribution to helping develop what has become online Soakerdom. Just shy of two years later, as the site had grown quite a bit and seemed to deserve a place of its own, iSoaker.com was launched (Aquatechnology.com was already taken).

Coming close to 10 years since I first began building a water blaster-themed website, iSoaker.com has come a long way. From its earlier days experimenting with Flash to diving into using ColdFusion in 2003. This upgrade is represents the largest encoding shift since the conversion of the site from static files to active ColdFusion files. However, migrating away from ColdFusion, iSoaker.com now runs using a good ol' PHP back-end. The change was made for multiple reasons including streamlining things together with the newly acquired iSoaker.net Forums and hopefully speeding up file access. Additionally, the organization of many sections on iSoaker.com have been greatly simplified. While there once was an articles database, this has been removed since its usefulness was minimal while maintaining it was more work. The stock soaker reviews retain being database driven, but review links have now been given a more permanent home (as permanent until the next Internet content-format revolution, of course).

Overall, while the general layout of the site remains similar to the past few updates, organization and file management has been hopefully better organized and streamlined. This should simplify navigating iSoaker.com for the visitor as well as updating iSoaker.com, itself. Assuming this transition is as smooth as is hoped and no major problems are encountered after this update, I can then focus back on content generation and general info updates, having built a better foundation on which the site now runs.

Reaching the 10 year mark (on July 18, 2008) for me running a water blaster-focussed website, more site updates and upgrades have now been made live. Since the 2008 (Summer) update was launched a good 6-months earlier than initially planned, there were undoubtedly some bugs and incomplete modifications that were in development when the converted ColdFusion-to-PHP-based site went live. The 2008 (Mid-Summer) update can be considered as a smoothening out of various graphical, design, and organization elements that were being worked on, but not ready for launch during the last sitewide update.

In short, the overall general feel of the site has been adjusted in various ways. As well, inner pages have also had various graphical elements tweaked. The most notable tweaks are visible on the main page; the styling has been adjusted to better match with the new header style. As well, more quick link icons have been added to help newer visitors to the site quickly jump into key information resources to introduce them to the world of water fights, water warfare, and water guns / water blasters, of course. In the coming months, more work will go into streamlining how iSoaker.com presents all the information it contains. One of the most recent additions, the Super Soaker Product Evolution Tree and Water Warriors Product Evolution Tree have been met with a lot of enthusiasm and praise; infact the Super Soaker Product Evolution Tree got featured on Gizmodo just prior to the July 4th weekend in the US (interestingly, just within hours of the pages going online). In all, considering the site has grown from a handful of pages occupying ~1Mb of space to hundreds (over 1400) pages occupying >600Mb of space, there's a good amount of information available for any visitor choosing to browse the site.

Soak on and, as always, Leave NO one dry!